Following a cocktail party on the film sets of ancient Rome, guests enjoyed the premiere of "Once and Forever,” projected onto a giant screen in the Piscina, one of the most important film studios at Cinecittà.

Following the screening, the collection was shown in Teatro N°5 — Federico Fellini’s favorite studio — which Lagerfeld transformed into a black and white ode to the Paris of yesteryear, reminiscent of the sets of the late French production designer Alexandre Trauner. Accompanied by the music of pianist Christophe Chassol, smoky-eyed models wearing two-tone mules or pearled sandals emerged one by one from a Paris Metro station.

Incorporating the tones of late autumn in Rome with the iconic colors of Chanel, beige, cream, grey, black and navy blue were added to a palette of brown, ochre, oranges and cappuccino. The iconic suit came in the form of a trompe-l’oeil dress and a three-piece version with jacket, straight skirt and cigarette trousers — all trimmed with film braid — while knee-length dresses and midi skirts were shown with small capes.

Fabrics, including tweed, mohair and curly wool; cashmere, leather, jersey, velvet, lace, silk crepe, chiffon and georgette, were accented with details like farfalle embroideries and pleated silk and feathers painted with motifs recalling Roman marble, for Parisian sophistication with a dash of Italian glamour. For evening, the silhouette was ultra-feminine, extraordinarily elegant and extremely delicate: lace négligées embroidered with tulle, sheath dresses in pleated velvet and nightgowns in crêpe georgette and guipure lace. 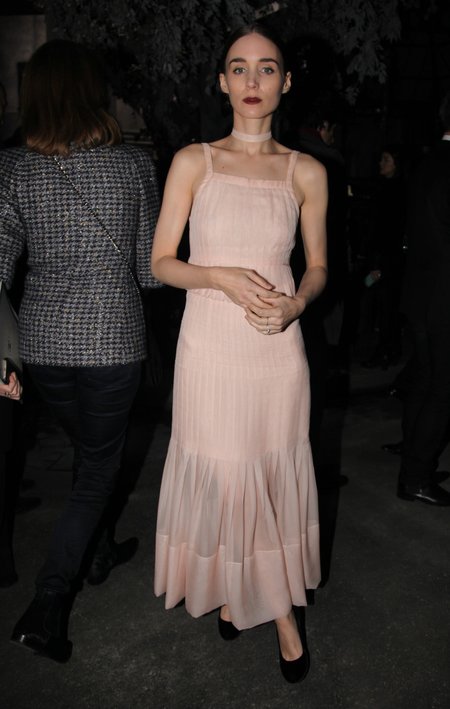