Ralph’s greatest hits? A stroll through Londontown? It appeared to be the best of both worlds, as the Swinging ‘60s came fast and strong at the designer’s fall show. Models sported floppy hats, ruffled shirts, wide cuffs and belts, fringed ponchos, black leather mini dresses, jeans and rich blue velvet jackets that wouldn’t raise an eyebrow on Aerosmith’s Steven Tyler. What followed was men’s wear inspiration with ties, double breasted suit jackets and even culottes (Diane Keaton, we’re looking at you). From the decidedly boyish classics, Lauren switched gears to more feminine, romantic looks, first in black, and then in an explosion of colors including purple, red and gold, as well as long dresses in rich paisleys and floral prints. Suede and tweed made way for chiffon. But the real showstopper was a gown made of iridescent gold fabric that commands attention from all angles. 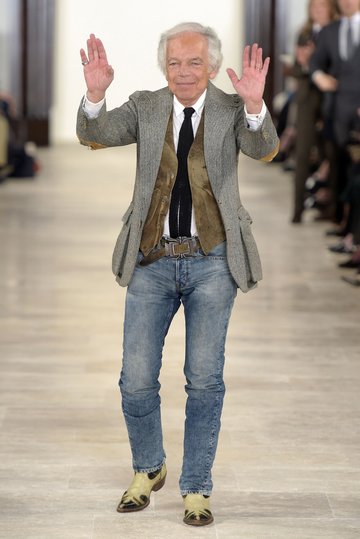