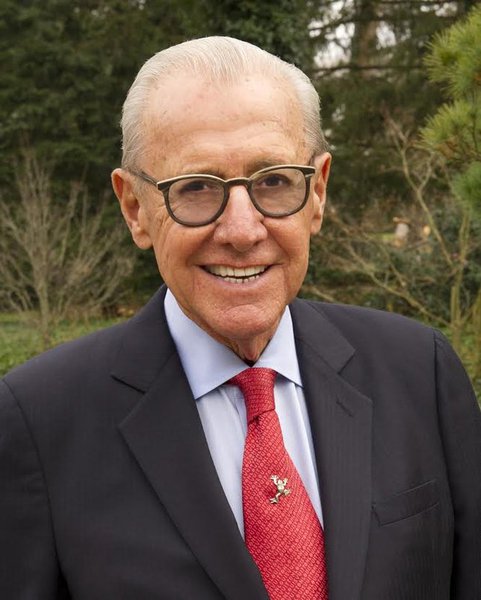 Frank Castagna was an esteemed New York real estate developer and a respected pillar of the Long Island philanthropic community.

Frank was born in Brooklyn, NY on September 19, 1928 to Henrietta & Ferdinand Castagna. He grew up in Sheepshead Bay and received his Bachelor of Science in Civil Engineering from Pennsylvania Military Academy (now Widener University) in 1950. After graduating, Frank joined Gerace & Castagna, founded by his father in 1922 as a masonry contracting company. It had evolved into a general contracting company by the time Frank came on board. In 1955, the company purchased property in Manhasset, NY and began the development of Americana Manhasset.

Since 1985, under Frank’s leadership and the banner of Castagna Realty Co., Inc., the company has focused on the development and management of its own projects. The evolution of Americana Manhasset continued, with Frank bringing on famed architect Peter Marino to serve as Master Planner. Over time, the Americana has become home to the most prestigious fashion and jewelry brands in the world, including Hermès, Gucci, Chanel, Dior, Louis Vuitton, Cartier, Prada, Fendi, Tiffany & Co., Burberry, Ralph Lauren and many more. Frank helped cultivate two family-owned boutiques, Hirshleifers and London Jewelers, facilitating their growth into two of Americana’s most substantial and unique stores. Regarding Americana’s success, Frank was quoted as saying, “We partner with people and companies whose core values include integrity and creativity, and that has made all the difference, enabling Americana Manhasset to become a true luxury destination for sophisticated shoppers.”

Past Castagna Realty residential projects include the development of 250 acres in Pound Ridge, NY known as Rock Rim Ponds which was the recipient of several national landscaping awards, and over 270 acres in Pawling, NY known as Brady Brook Falls. Castagna Senior Park, a planned 200-acre mixed-use project in Pawling, is a development currently in progress. Joint commercial ventures with other development companies include several office buildings in Garden City, NY and North Hills, NY, including the 230,000 square foot corporate headquarters for Dealertrack Technologies which received the 2015 Long Island Commercial Development of the Year award from Long Island Business News.

Castagna Realty Company celebrates 100 years in 2022. Frank and Rita’s daughter, Catherine Castagna, took on the role of President of the organization in 2019.

Personal and corporate philanthropy was a priority to Frank Castagna, and a commitment to community has always been an integral aspect of the Castagna family heritage and the Castagna Company culture. In accepting the prestigious AJC National Human Relations Award in 2014, Frank spoke of this commitment, saying, “While we think globally, we still act locally. Supporting and partnering with not-for-profit organizations that improve the quality of life in our community and beyond has and always will be a vital part of our organization’s fabric. The relationships that we develop with the remarkable individuals who spearhead and support these charities are extremely rewarding for me and Rita, my wife and partner, and for all of us at Castagna Realty.”

Frank, together with Rita, was personally involved in many charitable endeavors. North Shore Child & Family Guidance Center, Partners Council for Women’s Health / Northwell Health, and The Viscardi Center, among other organizations, have been near and dear to their hearts. They received the first annual David Taub Award from The Safe Center LI, as well as the Harry Chapin Humanitarian Award for Community Service from the Long Island Association. They have been honorees of Long Island Children’s Museum, Institute for Student Achievement, and St. Francis Hospital, as well as recipients of the Sid Jacobson Spirit Award and the Philanthropy Award from the Association of Fundraising Professionals. In 2007, Rita and Frank received the Hartman Philanthropic Leadership Award at the Cure for Sure event, and in 2009 they received the Telecare Award of Excellence. In 2010, Frank and Rita were honored by NLD for Pediatrics of the North Shore-LIJ Health System and in 2011 they were honored by Nassau County Coalition Against Domestic Violence. In 2013, Americana Manhasset was honored by American Cancer Society Asian Initiatives at their Night of Hope event. Rita and Frank were honored at the 2014 Leonard Ugelow Memorial Gurwin Classic, in 2015 by the Maurer Foundation for Breast Health Education and Tilles Center for Performing Arts, and in 2017 at the Nassau County Museum of Art Ball.

In recent years, Frank was Chairman Emeritus of the Council of Overseers for Tilles Center for the Performing Arts, Trustee Emeritus of Old Westbury Gardens, and Executive Vice President of the Board of Directors of the Nassau County Museum of Art, where he was a past President. He was a member of the Board of The American Jewish Committee (NY), Friends Academy and North Shore Land Alliance, among others. Long Island University awarded Frank an honorary doctorate degree in humane letters and he received an honorary doctorate degree of law from Touro College. In 2013 Frank was presented with the Spirit Award by the New York Mets at Citifield on Korean Heritage Night.

Frank’s legacy of giving extends to Americana Manhasset’s philanthropic marketing initiatives. Champions for Charity®, an annual holiday shopping benefit supporting over 100 not-for-profit organizations celebrates 25 years in 2020. The program, of which Frank was immensely proud, has raised nearly 14 million dollars to date, with over 1 million dollars raised in 2019 alone.

Frank was known for his vision, integrity, kindness and compassion. He did business on a handshake and garnered immense respect and admiration from the CEOs of global fashion brands, real estate development partners, charity directors, and his Castagna Realty team, among others. While he was an understated, humble and consummate gentleman, Frank also had an irrepressible smile and love of life. Upon the 75th anniversary of the Castagna organization, he reminisced about the culture of his family business, saying, “Sure, there were a lot of great parties, to celebrate a job, an anniversary, a holiday, whatever. Even in difficult times, if an occasion called for a celebration, one was inevitably produced.” He loved a good party, always made sure there was plenty of wonderful food and wine, and could be found on the dance floor much of the evening. With his generosity of spirit, Frank touched countless people in both his business and his personal life, and for him there was hardly a line between the two.

Frank was an adoring husband, and a devoted and proud father and grandfather. He balanced building a significant business with enjoying time with his family. He loved to travel and was an avid reader, both evidence of his inherent curiosity, and his passion for culture and learning. He is survived by his wife Rita, his son Fred, his daughter Catherine and her husband Ernie, his grandsons Brian, Michael, Frank and Mario, and his step-granddaughters Amber and Marissa.